The global chip shortage has been disrupting industries around the world for more than 18 months, and while there are signs semiconductor supply problems are starting to ease, major problems continue in many sectors.

While the cyclical nature of the chip industry means periods of shortage and surplus are common, the severity of the current crisis should not be underestimated. Linley Gwennap, principal analyst at tech research company the Linley Group, told Tech Monitor in June that the current situation is “the worst [shortage] I have seen in my three-decade career” covering the sector.

But why are we in this situation, and how and when will it be resolved? 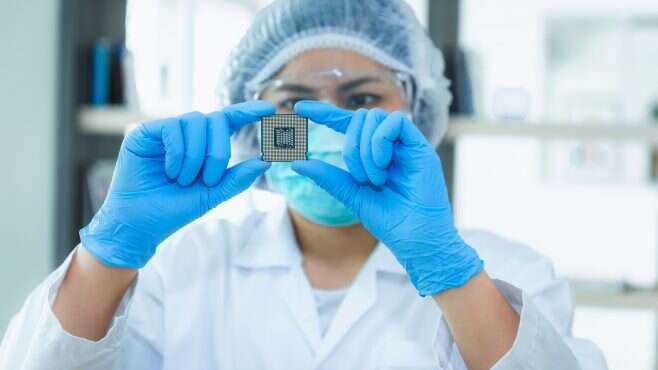 How and when will the chip shortage be resolved? (Photo by aha Heang 245789/Shutterstock)

What is the cause of the global chip shortage?

The global chip shortage was prompted by the Covid-19 pandemic and the surge in demand for electronics. Consumers and businesses started buying new laptops and servers to cater for staff working remotely and children being home-schooled. So, whereas worldwide semiconductor sales declined between 2018 and 2019, in 2020 sales grew 6.5%. This rapid growth continued through 2021, and in February 2022 total sales of chips worldwide were worth $52.5bn, up 32% year-on-year.

It is, therefore, no surprise manufacturers are struggling to keep pace, but the pandemic has also exposed pressure points in the global chip supply chain, with the vast majority of manufacturing being carried out by two companies – Taiwan’s TSMC and South Korea’s Samsung. These foundries are particularly dominant when it comes to the leading-edge chips used in mobile devices or for military applications.

Aside from the pandemic, other factors contributing to the shortage include a drought in Taiwan, the worst for 50 years, which has left TSMC and other manufacturers struggling to get hold of sufficient quantities of water, which is crucial in chip manufacturing. “Other events have held back supply, such as fires in factories, power outages and the transportation blockage at the Suez Canal,” said Shane Rau, a semiconductor analyst at IDC.

The war in Ukraine has also caused problems for the chip industry, particularly around the supply of neon gas which is used in the lithography printing process which is relied on by chipmakers. Ukraine produces between 40-50% of the global supply of neon, and the two biggest companies which sell the gas, Ingas and Croyin, shut down when war broke out. Though many in the industry say stocks remain at decent level, if the conflict continues for several months problems may arise.

“Anyone who doesn’t think [the war] is going to slow down the chip industry is dreaming,” says Lita Shon-Roy, president and CEO of analyst business Techcet Group. “We don’t know yet whether the impact will be minimal or major, but it’s going to have an impact.”

Which sectors are affected by the global chip shortage?

Shipments of PCs and laptop computers have been delayed by the shortage. In the first quarter of 2022 the number of computers shipped fell 4.3% according to figures from Counterpoint Research.

The shortage has affected a wide range of other business sectors, delaying shipments of Sony’s PS5 games console, as well as restricting the supply of TVs and other OLED displays.

The automotive industry has been hit particularly hard, with production lines around the world having to close for weeks at a time due to a lack of components. Ford and General Motors were among the companies to endure prolonged shutdowns of plants across North America during 2021, and Ford blamed continuing shortages on lower than expected revenue for the first quarter of 2022. “We continue to have issues with supply of chips, which constrained us, and in particular here in North America, it hit us disproportionately on our large vehicles,” Ford CFO John Lawler told a call with investors.

In March, the amount of cars produced in the UK dropped to its lowest monthly level since March 2009, with the chip shortage being one of a number of the factors causing the slowdown, industry body SMMT said.

According to analysis from GlobalData, the opportunity cost to the automotive industry resulting from lost production due to the global chip shortage stands at $47bn and rising.

Why is there an automotive chip shortage?

The automotive industry was hit particularly hard because it scaled back its orders at the beginning of the pandemic as demand for vehicles dropped, and then found itself at the back of the queue when it wanted to restart production at scale.

“The [chip] foundries business model is based on profit margin and volume,” Gaurav Gupta, vice-president for semiconductors and electronics at Gartner, told Tech Monitor. “Automotive electronics is a very small fraction [of their business], so now when demand has picked up and the automotive guys need chips they are not seen as a priority.” Joe Biden’s Covid-19 stimulus package, which saw American citizens given up to $2,000 by the government, has also seen demand for new cars in the US market spike. “A lot of people have that money burning a hole in their back pocket, and are putting it down on a car,” said Calum MacRae, head of automotive at GlobalData.

What is being done to solve the global chip shortage?

With demand for semiconductors likely to continue to increase as more industries undergo digital transformation, chip makers and governments are working to build more capacity into supply chains. TSMC is investing $100m in additional capacity over the next three years, while Samsung and SK Hynix, along with the South Korean government, have pledged to make $451bn of investment in capacity and incentives for chip makers.

But there is a recognition that chip supply chains must be diversified to decrease the reliance on Taiwan and South Korea. “America only makes about 10% of the chips it uses,” said Mike Orme, who covers the semiconductor market for GlobalData. “That’s not music to the ears of the American military or aerospace industry.” US president Joe Biden has pledged to support the semiconductor sector as part of his Build Back Better plan for boosting manufacturing, and a massive bipartisan tech funding bill currently going through the House would see $52bn earmarked for US chip production.

Intel, now under the leadership of Pat Gelsinger, plans to expand its fab capacity as part of a new strategy to make chips for third parties and compete with TSMC and Samsung. It is spending $20bn on two new factories in Arizona, a further $20bn on a site in Ohio, and in March announced an $80bn investment into the European chip ecosystem, which will include a new $17bn megafab in Germany.

The investment has been welcomed by the European Union, which earlier this year revealed details of the €43bn European Chips act, a policy designed to grow chip building capacity across the bloc. The UK government has yet to reveal any plans to help its domestic semiconductor sector and indeed, the UK’s biggest chip factory, Newport Wafer Fab, is now in the hands of the Chinese after a take-over by Nexperia.

When will the global chip shortage end?

Semiconductor supply had been expected to rebound by the end of 2021, but the global chip shortage is now set to last into next year and could remain until 2023, experts fear. The current investments in capacity will not make an impact for some time, Malcolm Penn, CEO of industry analyst firm Future Horizons, told Tech Monitor. “CapEx is now starting to happen but it takes a year to build out and kick in,” Penn said.

Though chip company executives have previously been bullish about the prospects of the shortage coming to an end sooner rather than later, many have sounded more cautionary notes in recent statements. Nvidia CEO Jensen Huang said recently that he expects “at least another year” of demand far exceeding supply. Intel’s Pat Gelsinger, meanwhile, told analysts on the company’s April 2022 earnings call: “We expect the industry will continue to see challenges until at least 2024 in areas like foundry capacity and tool availability.”

Can we expect another global chip shortage in future?

Even when the current global chip shortage ends it is likely more supply problems are just around the corner as demand for electronics grows further. “The capacity [the chip makers] are putting in place now will be enough for the next few years, and as these things come on stream there’ll be too much capacity,” said Gartner analyst Alan Priestley. “But then, in another five years, we’ll be maxing out capacity again because everyone wants the latest smartphones, and we expect to see demand for things like smart homes and electric vehicles increasing. The industry is very cyclical; that’s just the nature of the beast.”