Google is back in the robotics game with Intrinsic, a new spin-out that recently emerged from stealth mode promising to build a universal software platform for robots. This software could play a key role in lowering the barriers to entry when it comes to automation, and enable development of the robots-as-a-service model to make advanced machines more affordable for small companies.

Emanating from X, the special projects division of Google’s parent company, Alphabet, Intrinsic has been in development for five and a half years according to Wendy Tan-White, the company’s CEO.

“Intrinsic is working to unlock the creative and economic potential of industrial robotics for millions more businesses, entrepreneurs, and developers,” Tan-White said. “We’re developing software tools designed to make industrial robots (which are used to make everything from solar panels to cars) easier to use, less costly and more flexible, so that more people can use them to make new products, businesses and services.”

It is not the first time Google has made a foray into robotics. In 2013 it purchased Boston Dynamics – best known for its videos of acrobatic robots – before selling it to SoftBank four years later, after reportedly failing to earn its owner any revenue. If Intrinsic can deliver on its promises, its software could prove considerably more lucrative. 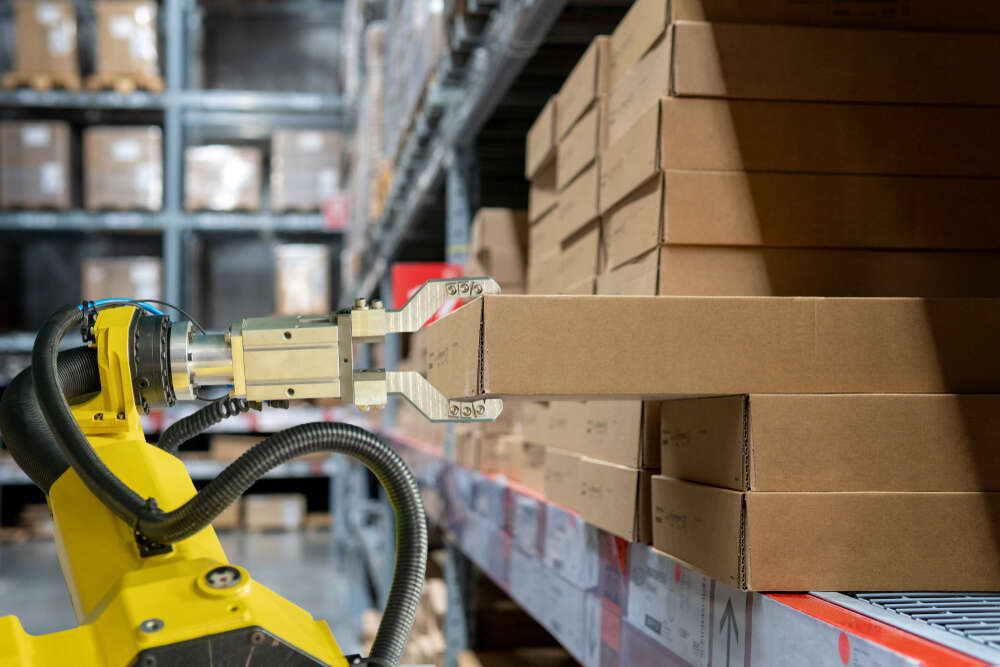 Robots on the farm: why Covid-19 hasn’t supercharged automation in agriculture

Why delivery by drone is still a distant prospect

While robots have been deployed widely in some industries, such as automotive, for some time, others have been slower to adopt automation. “We’ve seen big fixed robots in cages battering cars for more than 40 years,” says Paul Miller, principal analyst at Forrester who focuses on smart manufacturing. “But when you move to other parts of manufacturing, where throughput is lower and variability is higher, using a robot becomes more problematic. At the moment, robots are very good at doing the same thing again and again, and they need to do it a lot to justify the investment.”

Miller says so-called ‘cobots’, which are designed to work alongside humans in a more flexible way, have been developed as a solution to this issue. But, he says, “our data show only 29% of manufacturers are using robotics in a meaningful way, so there’s a big market still to address.”

Not only is the deployment of robots in manufacturing limited in numbers, the vast majority of investment is coming from Asia, meaning manufacturers in other regions risk being left behind. Making systems easier to use could help to level the playing field.

Professor Terje Kristoffer Lien is a robotics expert and professor emeritus at NTNU, the Norwegian university of science and technology. He agrees that small volume manufacturing remains a challenge when it comes to the economics of robotics. "Robots can do almost anything we need in manufacturing industries," he says. "But doing small batches is the primary barrier. In some cases, there's also the question of needing human oversight because the operation is so delicate or difficult that you can't trust a machine to do it. That's also a reason people are reluctant to use them."

Major players in the space, such as Swedish robotics giant ABB, are starting to address the flexibility issue, Miller says. "The big conversation at the moment is how you use robots alongside people," he says. "A lot of the early talk around robotics was about robots coming in to steal jobs, but in fact, the question is more about understanding how humans and robots can work together. That's why a lot of investment is going into easy-to-use interfaces which allow a shop-floor worker to show the robot what they want it to do."

What will Intrinsic do?

Intrinsic wants to provide one such interface. It is seeking to "take the logic of Silicon Valley and the platform economy, and apply it to industrial robots," says Rian Whitton, head of industrial, collaborative and commercial robotics research at ABI Research. "It wants to build a software platform that's applicable to all industrial robots, which will provide machine vision, planning, multi-robot control and no-code programming. I guess you could say it wants to be the Android [Google's operating system] for industrial robot control."

Having a simpler control system could make it easier for staff to re-program robots, meaning they could be used cost-effectively for smaller and more varied tasks. Whitton says the cost factor remains a big barrier for SMEs wanting to automate processes using robots. "When you're buying an industrial robot, you're not just buying the hardware itself," he says. "It's the installation costs, the redeployment costs, the maintenance costs. On top of that, they aren't always easy to use, and often small companies don't have the capital or the skills within their organisation to automate."

Robotics vendors - and the open-source community - have attempted to build universal control systems before, Whitton says. But he explains: "The issue is they all focus on one particular application. Intrinsic is a bit more ambitious and it wants to be general-purpose."

Intrinsic will use Google's expertise in AI and machine learning to learn how to programme robots in their specific languages and train them rapidly to perform tasks. A video shared by the company shows a robot assembling a piece of electronics equipment. "We trained a robot in two hours to complete a USB connection task that would take hundreds of hours to program," Tan-White claims. Professor Lien says he is sceptical about this claim and whether what Intrinsic can do represents a massive technical leap forwards. "Using existing tools for a task like that, where you have a set pattern, you could probably train a robot in half a day," he says. "I don't know the exact magnitude of the job, but it looks pretty easy."

Google is not the only Big Tech firm to rekindle its love of robots recently. At the company's AI day on Thursday, Tesla boss Elon Musk revealed Tesla Bot, a humanoid robot the company says it will market to complete tasks which are boring, repetitive or dangerous for humans. Musk said the robot will have "profound implications for the economy”, and has pledged to make it "not super-expensive" when it enters the market, which could be as soon as next year.

Tesla revealed details of its "Tesla Bot" at an AI event on Thursday. (Photo courtesy of Tesla press office)

Whitton says Big Tech companies are invested in robotics to varying degrees. "Amazon has been by far and away the most successful deployer of robots among the Big Tech companies," he says. "It has 350,000 robotic systems in its warehouses. Microsoft has some robotics platforms too." Google previously owned Boston Dynamics, but that didn't really go anywhere because it was a gimmick without a plan," Whitton says. He adds: "With Intrinsic, what it is doing is addressing a market that already exists, rather than building a robot for the future."

The involvement of Big Tech could speed up the development of a robots-as-a-service (RaaS) model, where businesses can lease robots and pay for the systems that operate them on the sort of consumption basis, a model that has become common in many other areas of technology. Whitton says at the moment this would appeal to businesses wishing to deploy robots, but not to the manufacturers: "It's cheaper for the end user, but for the vendor it doesn't make a lot of sense," he says. "It puts a huge amount of capital costs on the robotics companies. You do get some RaaS companies, like Sarcos, but at the moment their revenues are very small."

Whitton believes only the big cloud companies have the capability to deliver RaaS at scale. "You need a business capable of doing all the boring stuff which comes with a full as-a-service model which has very little to do with operating robots, such as training, remote deployment and support and incident response," he says. "A lot of these bits are completely unprofitable for the robotics companies, which means those best placed to provide them are the cloud platforms. What Google is doing here is entirely software-based, and I think that's a good move."

Forrester's Miller also believes widespread deployment of RaaS is on the way, but says that robotic technology will need to advance to make it a reality. "The robots have to be more flexible because for a lot of the ones you get now, you have to build an entire factory around them," he says. "For RaaS to really succeed you need a robot that's capable of coming up to the workbench and just doing whatever is in front of it. We're not quite there yet in most cases."

Topics in this article: Google, Robots