It’s official: the supercomputer arms race is getting hotter by the minute. Yet with the UK having just one machine that ranks in the world’s top 20 – the Meteorological Office’s three Cray XC40s – the country is, right now, “not competitive at all”.

That’s according to Professor Mark Parsons, the Director of EPCC at the University of Edinburgh, speaking at a panel discussion in London on April 16.

The panel was brought together in a modest step towards changing that, with Professor Parsons joining colleagues from the Universities of Bristol and Edinburgh, alongside industry partners Arm, Hewlett Packard Enterprise (HPE) and SUSE to announce a partnership dedicated to accelerating UK supercomputer adoption.

This will see the six partners collaborate to develop and deploy one of the largest Arm-based high performance computing (HPC) installations in the world – at a budget the partners declined to reveal, other than to describe as “substantial”.

They will run more than 12,000 Arm-based cores, hosted by HPE Apollo 70 HPC systems. The clusters at each university will be largely identical, consisting of 64 HPE Apollo 70 systems, each equipped with two 32 core Cavium ThunderX2 processors, 128GB of memory composed of 16 DDR4 DIMMs with Mellanox InfiniBand interconnects. The operating system is SUSE Linux Enterprise Server for HPC.

Mike Vildibill, VP, Advanced Technologies Group at Hewlett Packard Enterprise said: “We are currently seeing an insatiable demand for compute performance, as companies seek to gain actionable insights from their data. As we embark on the global race towards more powerful and eventually exascale [computers that can execute a billion billion calculations per second] systems, new approaches and technologies are needed to tackle some of the key challenges in achieving these levels of performance, such as rising energy consumption.”

The programme aims to provide training for researchers, equipping them with the knowledge and skills required to successfully and productively work with Arm-based systems in the future – with a specific focus on exascale computing.

The launch follows last week’s request for proposals (RFP) from the US Department of Energy to develop at least two new exascale supercomputers for the DOE at a cost of up to $1.8 billion. The RFP was issued as the second phase of procurements for exascale machinery for the Department’s Oak Ridge, Argonne, and Lawrence Livermore national labs.

Earlier this year, meanwhile, the Europea Commission announced plans to invest €1 billion to build the world’s fastest computer by 2023 – providing €486 million from the European Commission’s Horizon 2020 budget, with the remaining money coming from 13 member states.

Does the UK Have the Budget?

Asked by The Register’s Chris Mellor whether the UK “can afford” an exascale computer – which the panel estimated to cost in the £500 million region – HPE’s Marc Waters responded rhetorically: “Can it afford not to?”

Professor Parsons added: “HPC provides tremendous value for money. We should be able to afford it. Look at the Met Office saving lives quite regularly through their work. [Such investment] compares well with physical projects. The UK paid £132 million for its subscription to CERN last year, for example; because doing science is a good thing. But we need to continue to make the scientific and industrial argument for it.”

He concluded: “Japan, China, the US and Europe are getting their act together. The UK has to decide at which level it should invest. The UK should have one or two or we will be left behind.” 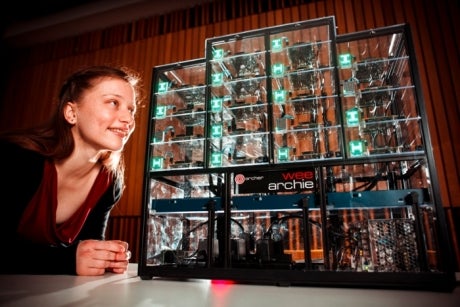 The University of Leicester will be using the new Arm-based systems to support a “broad spectrum of HPC workflows”, including simulations of gravitational waves and planet formation, earth observation science models and fundamental particle physics calculations.

Panelist Dr Mark Wilkinson, the University’s XX said: “By including an Arm-based cluster in our training portfolio, we will ensure that the next generation of UK HPC experts, both in industry and academia, have the necessary skills to exploit the most appropriate and cost-effective hardware when solving the most complex research problems.”

Professpr Simon McIntosh-Smith, Head of the HPC Research Group at the University of Bristol, added: “Bristol’s early experience with Arm via the EPSRC-funded GW4 Isambard project, and the European FP7-funded Mont-Blanc 2 project, gave us the confidence to explore deploying Arm-based supercomputers for real workloads in a production environment. The HPE Apollo 70 HPC systems will, for the first time, enable us to apply that experience to explore scaling across [the university’s supercomputing network] InfiniBand. We expect these results to be of great interest to our industrial and academic partners.”