The Inforum 2017 event in New York City has been marked by a number of major announcements and updates that are relevant across a wide range of industries.

Artificial intelligence (AI) stole the show to a certain extent, while other hot trends including cloud integration and the internet of things (IoT) were also key focal points at this year’s event.

The top announcements and updates from Infor are targeting revolutionary changes to processes undertaken by its customers, and they will be followed eagerly throughout the coming year as new cutting edge technologies are put to the test.

For many this will be the most significant announcement that stands proud above the long list of other important news from Infor this year. This news is widely considered the most important since the initial announcement of CloudSuites in 2014.

Coleman is an enterprise grade, industry-specific AI platform; the conversational UX sitting at the core of the new platform will in theory provide a new high level of communication. Infor seeks to present Coleman as a crucial member of the team, rather than a simple tool to be used by it.

Natural language processing has been implemented in Coleman, as well as image recognition to give the platform the ability to engage and to have a full spectrum of real awareness of events and the needs of the team.

It would appear that Coleman fits into a larger plan made by Infor, as there have been a string of pertinent moves leading up to the arrival of the new AI platform.

These have included the launch of CloudSuites, providing the ability to use AWS computing power for the purpose of analysing enterprise resource planning (ERP) data, and the acquisition of GT Nexus, a company that has allowed for the collaboration of an entire business network.

Coleman is also at the top of the list as its emotive namesake story will be highly memorable to many for a very long time to come.

This big announcement has also come forth from Infor’s acquisition of GT Nexus due to the functionality gained from its commerce network.

Networked CloudSuites provides further reach and intuitive reactions to the needs of the enterprise. The core applications of an enterprise are able to be linked to its logistics, finance networks and suppliers in one place, further widening network visibility.

With this update, Infor is building on the original launch of CloudSuites in 2014, providing a solution to the new world of commerce that the enterprise functions in, where an extensive network of third parties are commonly required.

Charles Phillips, CEO of Infor said: “The days when a single company was responsible for all aspects of its products, from sourcing to manufacturing and shipping to point-of-sale, are long gone; commerce today requires an extended network of suppliers, production, 3PLS, and financiers, yet the software that companies rely on has not adapted to this business model.”

CloudSuites is a set of industry-specific application suites are delivered using the AWS cloud; the cloud is absolutely crucial in the plans of Infor, stating that cloud is a super computer. 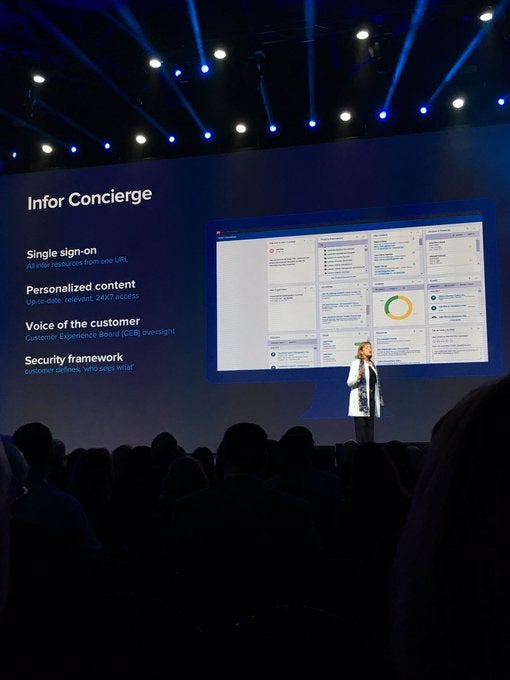 Another stand out announcement from Inforum 2017 was that of the new tool, Infor Concierge.

This tool will provide customers with one portal to access all of the important resources, content, and sites within Infor. Importantly the service will be available twenty four hours a day, seven days a week.

The research behind the design of Infor Concierge was deep, having drawn upon the Infor Customer Experience Board; this board of customers is global.

Some of the capabilities that Infor Concierge tool will provide to customers include access to updates pertaining to support incidents, as well as a platform for voting on product enhancement, and snapshots of important information. Infor Concierge will also form one place to find al necessary product documentation.

The tool was designed to work with Ming.le; this adds role-based home pages that come loaded with widgets linking in ERP systems. We found out a Inforum 2017 that not only does the platform combine capabilities and systems, it also opens a line of communication between Infor communities.

Mary Trick, executive vice president and chief customer officer, Infor, said: “Infor wants to make sure that we are the easiest enterprise software provider to work with when it comes to understanding all aspects of an organization’s interactions with Infor. Giving our customers access to this kind of information allows them to resolve business issues faster and get the information they need and want at any time, without having to deal with multiple calls and emails.”