IBM began adopting Macs for its employees in 2015, with Big Blue quickly counting itself as one of Apple’s biggest corporate customers.  IBM’s first deployment of Apple Macs to its workforce saw 30,000 Macs chosen by employees. This number has now tripled, with 90,000 employees choosing Macs over PCs.

In the course of Mac adoption, IBM has had its assumptions regarding Macs as expensive turned on its head. Speaking at the Jamf Nation User Conference yesterday, IBM VP of Workplace as a Service Fletcher Previn revealed that Macs are actually proving to be a cheaper than PCs. 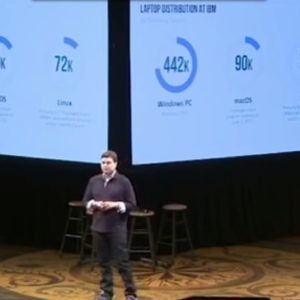 Fletcher Previn, IBM VP of Workplace as a Service, gave a keynote at the Jamf Nation User Conference.

“IBM found that not only do PCs drive twice the amount of support calls, they’re also three times more expensive. That’s right, depending on the model, IBM is saving anywhere from $273 – $543 per Mac compared to a PC, over a four-year lifespan.

“And this reflects the best pricing we’ve ever gotten from Microsoft. Multiply that number by the 100,000+ Macs IBM expects to have deployed by the end of the year, and we’re talking some serious savings.”

This is not the first time that Previn has made such comments in regards to Macs vs. PCs at Big Blue. At last year’s Jamf Nation User Conference, in just the few months after the first deployment of Macs at IBM, Previn stated that Macs required less management and setup efforts than PCs, even though they cost more initially.

Fast forward to this year’s conference and Previn remained committed to his stance that Macs are cost effective, saying: “Every Mac we buy is in fact continuing to make and save IBM money.”

According to employee stats from IBM, this adoption of Macs is only going to grow. 73% of IBM employees want their next machine to be a Mac, with IBM trying to keep up with this demand by deploying 1,300 new Macs every week.